History in the Making: 40 Years of Exceptional Entertainment 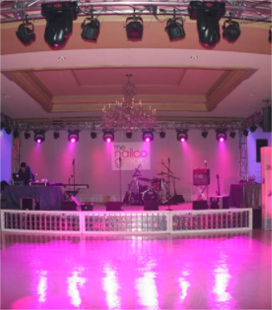 1972, Jerry Ross, leader of the very successful ‘Jerry Ross Band’ was contacted by Sam Locricchio, the leader of another very successful band named ‘Lorio’ with an idea to partner together and form their own talent/booking agency.

In August of that year, the inception of Lorio Ross Entertainment came to fruition.

Their mission statement: “To represent only the best talent in the business” quickly provided them with a roster of exclusive talent that propelled them in becoming the largest band booking agency in Michigan. Being known for having the best entertainment in the area, many opportunities presented themselves not only in booking lounges and nightclubs, but also in the wedding, corporate event, festival, hotel and country club business.

By the late 1970s, Jerry Ross had purchased all the stock in Lorio Ross Entertainment and became its sole-proprietor. In the early nineties, he seized an opportunity and opened a new division marketing karaoke equipment and shows. They became the exclusive dealer of DK Karaoke in the mid-west, selling equipment and discs all across the U.S. Soon realizing the popularity and demand for karaoke, Lorio Ross began providing professional karaoke hosts and equipment to many of the local bars and restaurants.

In 1994, another opportunity presented itself. This time, it would entail the merging of a well- known ‘rock band’ agency—Sterling Diversion, founded by a former Motown producer and concert promoter Joe Peraino. Joe and Jerry agreed to terms of the merger and formed what is now known as Lorio Ross Sterling Entertainment Agency, Inc.

In August of 1997, Jerry approached Kim McKinney the talented bandleader of a band called L’USA, about joining Lorio Ross Sterling Entertainment. Kim came aboard as an agent and soon became a partner and the company’s President.

Since its inception four decades ago, Lorio Ross Sterling Entertainment has evolved into one of the largest full-service entertainment and production companies in the Midwest.

Whether it’s providing their expertise to many of the Fortune 500 Companies across the U.S. or helping someone secure a band or DJ for their local wedding reception, the expectation of quality and service remains the same.

After 40 years, the belief in representing the “cream of the crop” and holding to a standard of excellence by providing 100% service satisfaction and developing a loyalty and trust that establishes and nourishes a long-term relationship with each and every client, is the reason this agency has endured stable and strong.

Very simply put, "Build a better mousetrap and the world will beat a path to your door." - Ralph Waldo Emerson